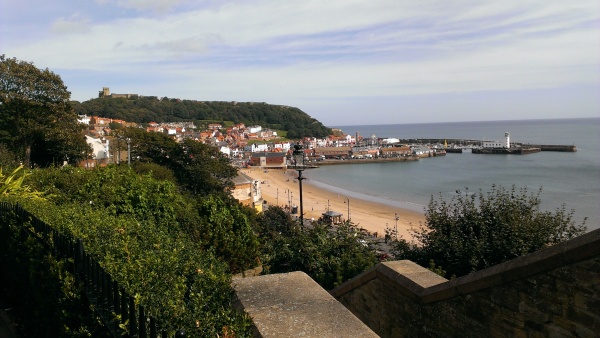 Scarborough – home of all things sci-fi, fantasy and horror!

The main hotel was, shall we say, interesting. Scarborough itself seemed to be stuck in a bit of a time warp – appropriately perhaps. But no-one can deny that the Grand is awesome to look at – a Gothic façade that dominates the Scarborough seafront. The main staircase served as an impressive backdrop, as did the various antique ballrooms.  I found myself reminded of The Shining several times!

The Overlook Hotel… I mean The Grand in Scarborough.

Registration was easy enough, although the wristbands proved to be a bit fiddly and impossible to remove, except by accident! The usual bag of goodies included a stick of rock, to put us in the mood. Having learned from previous experience, I signed up to several of the agent/editor sessions and masterclasses straight away. Perhaps unsurprisingly the session with Joe Hill was booked up even before Friday afternoon.

Fantasycon 2016 was absolutely stuffed to the gills with panels and events. I attended as many as I could fit in around socialising, which is the most enjoyable part of Fantasycon.

Also, the newly-launched UK chapter of the Horror Writers Association was a strong presence. Friday saw the HWA launch several books in concert with Jo Fletcher Books. Many authors were on hand to sign their latest books and to rub shoulders with newer authors like myself. Kudos to HWA organisers Paul Kane and Marie O’Regan for hosting such a well-attended event.

Agents and editors were also available to provide insights into the world of publishing and screenwriting. I found these sessions to be a particular highlight and hope they will continue to be a theme at future cons.

Another addition to the programme was writing masterclasses sponsored by Gollancz. These were of a very high standard, catering to the new writer but also useful to writers of all levels.

There were many book launches over the weekend. In fact, you needed limitless pockets to be able to attend them all! But the ones that I did get to were lively, informal affairs. Of course I soon abandoned my vow not to buy any more books and came away with a small armful.

Saturday saw another horror panel: “Creepin’ up on You”, about the overlap between reality and horror fiction. Chair Paul Finch interjected some welcome humour into what could have been very grim proceedings. Other attendees included living legend Ramsey Campbell, Tracy Fahey, VH Leslie, Helen Marshall, and Mark West.  Topics ranged from the scariest things ever written, to things the writers would not consider writing about, and an interesting discussion on how shifting cultural awareness has meant that some horror devices may no longer be legitimate ways of frightening an audience, such as the “terrifying” reveal of the disfigured composer’s face in the Phantom of the Opera.

Another standout was the HWA panel on getting published. The experienced panellists included Paul Kane, Marie O’Regan, agent Ian Drury, publisher Jo Fletcher, and editor Stephen Jones. Again, this was a standout for me, with many “dos” and “don’ts” on dealing with publishers and agents.

Saturday evening saw my first ever reading at Fantasycon (though not my first ever reading) along with horror scribe Terry Grimwood. The listeners were very graceful and it seemed to go down well. I thoroughly enjoyed Terry’s reading from his new book. My thanks to Roy Gray for providing much-needed coffee!

Afterwards, all eyes were on the legendary Fantasycon Karaoke, the disco, or the bar. I stayed up way too late and had way too much fun nattering to people. Sometime after midnight I slunk off to my guest house to grab a few hours of sleep before Day Three! 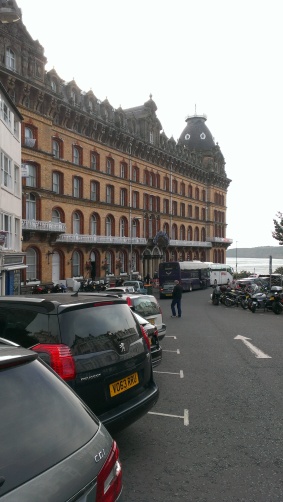 The Grand lives up to its name – from the outside, anyway.

On Sunday morning I took part in my first ever Fantasycon Panel. “Lost in Hollywood” was moderated by agent Ellen Gallagher and featured legendary TV writer (and all-round nice bloke) Stephen Gallagher of Dr Who and Oktober fame, as well as Stephen Volk (screenwriter of Ghostwatch and Gothic), as well as Remington Steel TV writer Joanna Horrocks. The discussion was wide-ranging and I enjoyed it a heck of a lot. Hopefully, I’ll get to do it again!

My Sunday ended with the Monster mash panel, in which Ross Warren, Adam Millard, Georgina Bruce, Alastair Rennie, and Laurel Sills discussed monsters and what makes them scary (or not). It was a lively and varied debate, and I found myself getting one idea after another as I listened.

The BFA Awards ceremony rounded off the weekend. Having never attended one before, this was an eye-opener, and as each Award was dished out too thunderous applause I found myself aware of just how much the BFS is a very inclusive family.

In all, I found Fantasycon-by-the-Sea the best Fantasycon yet.  Or perhaps I’m just getting into the swing of things more. It was great to catch up with existing friends and to make some new ones. As always, my reading list has grow exponentially. It was also great to continue to appear on panels and perform readings. My thanks to the more experienced writers who took time to talk with me at length about this insane and insanely entertaining business we’re engaged in. I left feeling invigorated, pumped up, and ready to write. To anyone who hasn’t been, I can’t recommend the experience highly enough.