Today I’d like to share something for all the horror movie fans out there. I’ve always loved werewolf movies. One of the first horror movies I ever saw was “Frankenstein meets the Wolf Man”. As my novel THE AUTUMN MAN is also a werewolf novel it made sense to study the genre. The result was a book about werewolf movies that I will be finishing soon. Here is a free excerpt from that book for your delectation and delight, in which I examine the very first werewolf movie, a “lost” silent  film called “The Werewolf”. This article was originally published in “Withersin” magazine. I hope you enjoy it!

Bison Motion Pictures (as 101-Bison). 18 min. Directed by Henry MacRae. Screenplay by Ruth Ann Baldwin based on the short story “The Werewolves” by Henry Beaugrand.

All copies of the film are now believed lost. Only a few still images survive.

When most people think of the first werewolf film, they think of Lon Chaney Jnr. in The Wolf Man (1941). However, that honour actually goes to The Werewolf, a short silent film made several decades earlier in 1913.

Silent film star Marie Walcamp plays Kee-On-Ee, a Navajo woman who believes she has been abandoned by her husband, when in fact he has been killed. She becomes a bitter witch, hating all white men and taking revenge through her daughter Watuma, whom she teaches to transform into a wolf and attack the invading settlers. However, a friar armed with a crucifix dispatches the unhappy girl. One hundred years later, Watuma returns from death to take revenge once more.

Lycanthropes have a healthy tradition in Native American folklore. In Navajo legend, the Yea-naa-gloo-shee (“he who goes on all fours”) is an evil witch with the supernatural ability to take on animal form. However despite this cultural legacy, The Werewolf remained the only film to examine Native American legends of skinwalkers for many years to come.

Tragically, the last known print of The Werewolf was destroyed in a fire in 1924. Yet we know that the special effects in the movie consisted of a simple camera dissolve from a woman to a real wolf.

As the for the original short story, Beaugrand’s werewolves are clearly enemies of Christianity. In league with the Devil, they are dispatched by a crucifix or holy water. But in the film, the tragic nature of the werewolf and the idea of the misunderstood monster make The Werewolf more than a simple morality tale.

It is tempting to give The Werewolf too much credit because we will never know how much these ideas come out in the movie, which was only very short in any case. However, the themes it foreshadows would become staples of the horror genre, from The Wolf Man through to The Incredible Hulk and beyond. 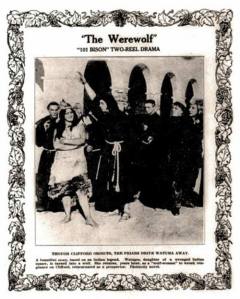 Another intriguing still from the film.