Let’s get down and dirty in this post by exposing some of the worst horror movie clichés out there. Some of these – like the axe-murderer in the back seat – are so old I’m not even going to talk about them. Instead, here are some of the more insidious violators of the audience’s desire for something new. Most of these are lazy, cynical ways to make a movie. Don’t let them find their way into your screenplay! 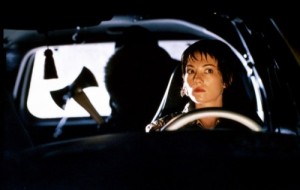 Just because you know you’re using a cliché doesn’t mean it isn’t a cliché.

Girl trapped in the basement of a serial killer

We’ve all seen this one. A hot girl gets kidnapped by a serial killer and spends the next two hours screaming, trying to break out, breaking out, getting recaptured, and finally killing the serial killer. Yes, it’s zero budget. It’s also zero-entertainment. If there ever was a point to telling a story like this, it was done in “The Silence of the Lambs” over twenty years ago. Please, no more!

People in a bunker

In the 1960s shows like “The Twilight Zone” used this setup to tell thought-provoking stories of bigotry, prejudice and paranoia in a Cold War age. Today, it’s an excuse for a low-budget movie. If your movie isn’t a political allegory, avoid this cliché. In fact, even if it is avoid this cliché.

A group of unfeasibly hot scientists/investigators/college kids go snooping around in a big old building. Of course they can’t find their way out once they’re inside. It’s haunted, you fools! Cue ghosts, demons, a serial killer etc. If you’re going to tell this story, you better have one very cool monster. Oh, and those smart-alec kids/investigators? They’re really annoying.

Must be incredibly hot, twenty-somethings and dressed to kill. Uh, not literally. No, because these beautiful creatures won’t be doing any killing. They’d sooner get it on with each other! In these stories – allegories for wealthy high schools and colleges – we usually sympathize more with the villain who is trying to bump off as many of his classmates as he can – until of course he starts spouting those cheesy lines of dialogue. 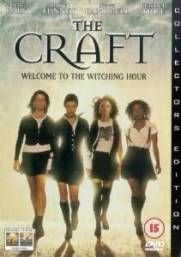 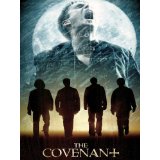 Spot the difference? That’s right, the one on the left made more money!

Picture this: your girlfriend is wandering alone through a scary old house/asylum/abandoned hospital/hillbilly shack etc. You see her and decide to get her attention. How do you do it? Call her name? Cough loudly? No, you creep up to her silently and grab her shoulder. Watch how she screams! This ploy also works when you reverse the genders. Seriously, what’s the matter with you! Oh, it was an excuse for a cheap scare by the writers. Ah…

Basically any scene where someone closes a mirrored door and sees a face behind them. Or closes the refrigerator and someone is standing there. How did they get there? Are they wearing cushioned slippers so they couldn’t be heard? Damn those psychos and their cushioned slippers. Oh, and this one works ever better if you have some “jump scare” music as well.

So you’ve reached the end of your boring slasher movie. Now what? What this movie needs is… a double twist! So now the final girl gets killed, and it’s the not-so-final girl who survives! Or maybe the final girl has hallucinations that she’s being stalked by the killer even though she’s safely strapped to her psych ward bed. She’s a basket case. The horror! First popularized in Brian De Palma’s version of “Carrie” in the Seventies. Nowadays, it’s just another excuse for a cheap plot twist that robs the film of any emotional payoff it might have had. 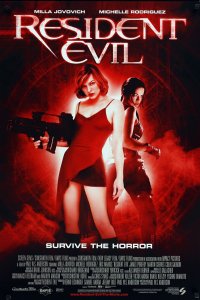 Nothing can stop Milla Jovovich, not even plot tension.

“The Matrix” has a lot to answer for. Floor length PVC coats. Funky spectacles. Kung fu fight scenes. But one thing we can do without is the kick-ass heroine. Impossible to defeat, able to take out 250-pound gorillas despite looking like she never even hits the gym, this frail-looking hot girl can punch holes through solid steel and perform improbable back flips. Sometimes explained by SCIENCE. Sometimes not. Next time you see a hulking serial killer who has spent his life stalking and murdering humans taken out by a five-foot co-ed with a stick, you’ve met the kick-ass heroine.

If you thought this was a stereotype, you’d be right. It’s a well-known fact that any male who does sports in high school is a sexist bully with a brain the size of a hen’s egg. You can usually spot this character by his natty baseball top and rippling muscles. Whatever the most sensible course of action is, he will oppose it. Even if he has just seen his friends get ripped apart by a murderous sasquatch, he will run into the woods and chase the monster down armed with nothing but a wet towel. But it’s the way he badmouths his girlfriend that seals this character’s doom, because he just insulted the movie’s target demographic!

No matter how extensive your network coverage, you can bet that your cellphone will start to misbehave at a crucial moment. This is most likely to happen just after the first death occurs in your party. No matter how expensive your pricing plan, your movie phone is not going to save you now. You see how I just isolated the characters so the monster can pick them off one by one? Genius!

Most of the said monster will be rendered in appallingly bad 1990’s computer animation. Sharks are the favoured creature of choice, modified by a mixture of sabretooth tiger, giant snake, octopus, robot, crocodile, or whatever graphic the CGI animator has to hand. For bonus points, find a ridiculous way of getting your aquatic monster onto dry land. Ghost Shark, anyone?

If you’re too cool for regular horror tropes you might just want to go full postmodern. In this kind of movie, the teens know all the rules for serial killer movies. They endlessly reference plot points from horror films, thereby continually reminding the audience that what they’re watching is in fact only a movie. Used ad nauseum in the “Buffy The Vampire Slayer” TV Series and to varying effect in the “Scream” movies, this irritating glitch makes us want to punch our TV sets as hard as possible while yelling “Shut up talking about horror movies and show me a horror movie!” This type of movie is often coupled with the Double Twist. Because OMG, it’s just so postmodern!

There are plenty more bad clichés out there, clichés so ugly they should have been destroyed at birth. But these are the ones I keep seeing over and over again in modern horror movies. So before you rush out to make the latest girl-trapped-=in-a-basement-by-a-serial-killer movie, please check out this list.

As for a big budget tentpole horror movie set in a bunker by one of Hollywood’s top directors… that couldn’t happen nowadays, could it?