Yes, we made a movie! This very overdue post is to tell everyone that our new British vampire feature film, “Boy #5” has been completed and edited. We are now ready to unleash it upon the world! But what is it about, I hear you cry? 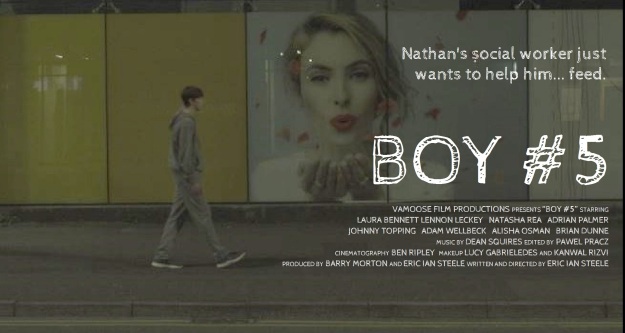 “Boy #5” tells the story of a burned-out social worker who tries to help a boy who has been found on the streets – shy, withdrawn Nathan. But as she gets closer to him, she learns that Nathan has a very peculiar type of mutation, with a thirst for human blood!

The film features special effects and some gruesome make-up that was so believable we even fooled some of the locals! The entire movie was self-funded by ourselves. All the special effects are practical, not CGI, and the actors are all from the Manchester area. We also had some stellar crew who kept on working long after dusk. Just as well, really.

The “Doctor’s office” scene, where things don’t go too well for our main character.

Yes, we hit a few bumps along the road what with a worldwide pandemic and all, but we’ve finally finished editing and all that jazz. Now we’re going to be moving forward and trying to get it out there so you can all see it!

Filming the “vampire night club scene”, involving a cast of thousands (not literally).

If you like indie horror, low budget cinema, and original storytelling in horror, you’re going to like this. It’s been a long, arduous road, but we think it was worth it. And we have a brand new production company, Vamoose Productions Ltd. Remind me to tell you the story behind that name some time.

We shot the film entirely on location in Manchester, England. Making it was a story in itself, and you can read all about it over at the Stage32.com blog here.

And don’t forget to take a look at our Facebook page.

We are now going to be searching for distributors and entering festivals. More pictures and details will be coming very soon. So stay tuned!