Today, I have been kindly nominated by science-fiction novelist writer Craig Pay to join the “Meet My Main Characters” blog tour and tell you a little about the protagonist of my forthcoming sci-fi horror vampire novel, PROJECT NINE! 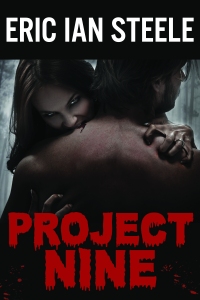 What is the name of your main character?

The main character is Luke. Shall we call him a hero? That would be a problem, seeing as he commits multiple murder throughout the novel and digests the blood of his victims. Admittedly he does so to stay alive, but I’m jumping ahead of myself…

When and where is the story set?

The present day. Mainly around Iowa and Kansas. There are also some scenes set during various historical periods throughout the last century, seen in flashback.

What should we know about Luke?

Actually, we know very little about Luke before the main story begins. We first meet him when he is burying his mother. We next see him when he’s getting very drunk. Then the action starts…

What is the main conflict? What messes up his/her life?

He falls in love, of course. What else? Unfortunately for Luke, the girl he falls in love with (Lynne) happens to have escaped from a secret government research facility that has created real vampires through gene therapy. Before he knows what’s happening, Lynne has infected him with the genetic virus that causes vampirism. But theirs is no romantic world of opera capes and Romanian castles. Luke’s new existence is a grubby one, where he must commit brutal murder every night and drink the blood of his victims in order to survive. Left with no other option, Luke joins Lynne and her three friends, fellow escapees from Project Nine. However, an obsessive Iowa detective learns the truth, and sets about pursuing them across three states. And the detective is not alone, because the government department responsible for infecting Lynne and her friends are determined to bury their mistakes, permanently.

What is the personal goal of the character?

Luke wants to spend eternity with the woman he loves. But he also wants to survive at any cost. And that desire is going to lead him down some very dark alleyways indeed…

When can we expect the book to be published?

“Project Nine” is going to be published very, very soon. “Like” my Facebook page to receive regular updates:  https://www.facebook.com/pages/Eric-Steele-Author-and-Screenwriter/522318187899385?ref=hl

You can also follow me on Twitter under: @EISteele for my “a horror movie a day” tweets and other goodies.

The next nominated writer in this blog tour is:

Kevin A Ransom created the movie film criticism site MovieCrypt.com in the late 1990s. He is a member of the Online Film Critics Society and channels the site’s host, Grim D. Reaper. Kevin has two book series: The Spooky Chronicles; and The Matriarch. He is also an active member of The Horror Society. His website is: http://thinkingskull.com/

In the meantime, pleasant dreams…