There have been some beautiful films made. The films in this list aren’t necessarily the prettiest, but they all share some of the most visually striking images ever committed to film. The films below may be obvious, or they may be obscure. But they were all made by master directors who can tell a story visually.

A still from Sunrise. Watching this Oscar-wining silent movie is an unforgettable experience.

Sunrise: A Song of Two Humans (1927)
The first in our list is a silent movie that has to be seen to be believed. Every frame is like a wonderful painting coming to life. Added to that, the film is filled with cinematic tricks, double exposures, and everything but the kitchen sink. FW Murnau was lured to Hollywood after making Nosferatu by the promise of being able to do whatever he wanted. The result is this awesome film that tells a very simple story in a very imaginative way.

Fantasia (1940)
Fantasia is the first animated Walt Disney feature film to depict classical music though animation. It’s gorgeous, funny and thrilling, comprising dancing ostriches, nymphs and satyrs, dinosaurs and demons. Apparently Disney wanted to make more experimental films, but the Second World War destroyed his foreign markets so he had to go back to fairy stories. It makes you wonder where he would have gone from here had not WWII intervened.

The Red Shoes (1948)
Powell and Pressburger made some beautiful films, such as A Matter of Life and Death with its celestial court, Black Narcissus and Tales of Hoffman. But this updated fairy tale is a gorgeous riot of colour filled with tableauesque shots like oil paintings come to life. Martin Scorsese’s favourite film.

A gorgeous Technicolor moment from The Red Shoes.

The Third Man (1949)
The black and white photography is perfectly suited to post-war Vienna and the shady dealings in Graeme Greene’s crime thriller. But it’s the final underground chase scenes involving the mysterious Harry Lime that makes this one of the best photographed films I’ve seen. The Vienna sewers become a nightmarish funfair ride to the accompaniment of that famous balalaika!

Night of the Hunter (1955)
Who can ever forget the image of the murdered mother at the bottom of the river, her hair floating in the ghostly current? Or the tattooed knuckles of Robert Mitchum? Charles Laughton’s only directorial effort is an American Gothic pastoral fable filled with iconic, haunted images.

Lillian Gish keeps a lonely village in Night of the Hunter.

Vertigo (1958)
Alfred Hitchcock’s most handsome production sees James Stewart haunted by the memory of a lost love, only to find it again in Kim Novak, who so clearly resembles his former lover that he even remakes her in that image. Right from the title, this film is a delight to watch, with terrific composition, all of Hitchcock’s trademark camera tricks, and an intense performance by Stewart. By the end of it you will be dizzy!

Lawrence of Arabia (1962)
David Lean’s masterpiece is a true desert epic. There are giant vistas, sand dunes and Arab armies mounted on camels. But there are also much subtler moments of symbolism – the way the Arabs follow Lawrence’s shadow on the ground as he postures after winning a battle. A legendary film that deserves every one of its accolades.

Kwaidan (1964)
The most expensive film ever shot in Japan for a time, Kwaidan tells several ghost stories set in that country’s feudal history. The first, Snow Woman, is probably the most beautiful to look at. Shot in colour, but with sets that were hand painted by the filmmaker, it makes you feel cold just watching it. Well worth tracking down.

2001: A Space Odyssey (1968)
Little needs to be said about this sci-fi classic. Its groundbreaking sets and models paved the way for movies like Star Wars a decade later. Indeed, its incredible just how well the space scenes stand up. Also refreshing is the lack of sound in space, which really amps up the tension when the astronauts face off against psychotic supercomputer HAL in the film’s later sections. A sequence of incredible images presages the film’s climactic journey through the wormhole, only to leave us guessing at their true significance as the film fades out. 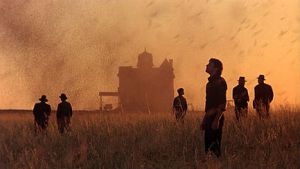 A plague of locusts descends in Days of Heaven.

Days of Heaven (1978)
Gorgeous Terrance Malik movie with Richard Geere and Brooke Adams. The Depression-era landscape is sparse, consisting of sky, corn and the huge house – emblematic of the simple, human story the film reveals. One of the 1970s greatest films.

Ridley Scott’s advertising agency background is nowhere more apparent than in this cult sic-fi, featuring Harrison Ford as a futuristic P.I. and a unforgettable turn by Rutger Haur as the android he is sent to destroy. 1940’s noir is everywhere here, but with the dial turned up to 11 on the style setting, from Rachel’s enormous fur coat to the art deco pillars in the Tyrell Corporation HQ. A beautiful film.

Movies at the speed of light in Koyaanisqatsi

Koyaanisqatsi (1982)
Using state-of-the-art (for the time) tricks such as slow and fast motion and time lapse photography, Geoffrey Reggio’s film contrasts the timeless beauty of Monument Valley with the dizzying pace of modern life. Shot to a hypnotic Philip Glass soundtrack, it became one of the most iconic pieces of film ever, copied and imitated countless times.

Pink Floyd The Wall (1982)
Although not appreciated fully on release, Alan Parker’s extended music video of the Pink Floyd concept album features a rather lifeless Bob Geldoff as rock star Pink, a man on the cusp of a complete mental breakdown. But it’s the wonderful Gerald Scarff cartoons interspersing the live action footage that steal the show. Marching Hammers, a demonic Judge shaped like something rather indescribable, and a Hammer-headed schoolmaster pushing his pupils though a meat grinder are images that have passed into public consciousness. An underrated film that is well worth revisiting.

What Dreams May Come (1998)
Robin Williams stars in this tale of a man who finds himself stranded in the afterlife following the death of his children and his wife’s nervous breakdown. Not a comedy, you might think. But this movie contains so many emotions that watching it can be an exhausting experience. The film also contains an unforgettable rendition of the hereafter, where whatever you dream becomes reality, and Heaven resembles something out of a Renaissance work of art. A rare example of a modern movie that uses gorgeous colour to its full potential.

Robin Williams looks out over a heavenly vista in What Dreams May Come.

Marie Antoinette (2006)
I’ve long been a fan of Sofia Coppola’s movies ever since seeing the very stylish Virgin Suicides. Although the plot here is minimal, with Kirstin Dunst’s titular ruler having fun a lot before the Revolution arrives on her doorstep, the photography captures a kind of childish innocence and a love of nature and beauty. It’s a pleasure to watch the images unfold in cinema verite fashion, showing us a childish monarch who was simply divorced from reality.

What do you think? Do you agree? If not, be sure to let me know! Meanwhile, I hope you enjoyed this selection of some of the most beautiful films ever made!